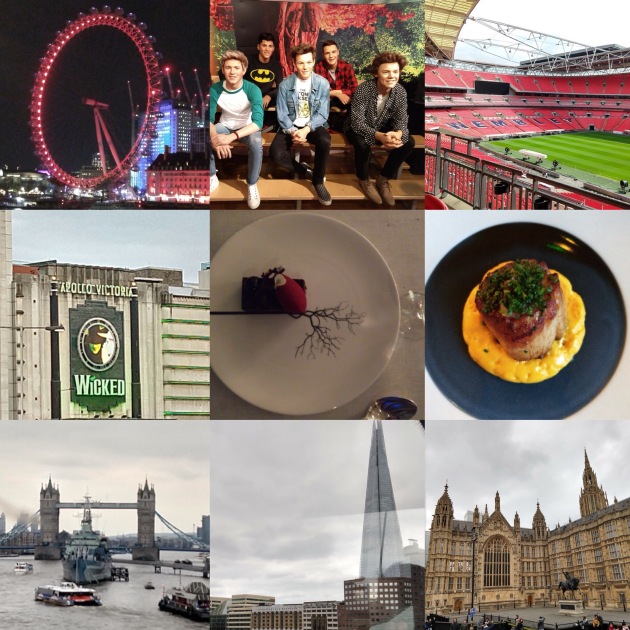 For my first time visiting London earlier this spring, I really enjoyed it. It is common to pack your itinerary so full because there is so much to do and see. Yet realistically, it is essential to space each event to account for a long wait in line for each experience. On my recent trip to London, I only had the opportunity to experience a fraction of the attractions that I expected. The average wait time for each event was 1 to 1 & 1/2 hours in line, and it was often cold and rainy making the wait a bit uncomfortable. Be sure to dress appropriately for the chilly rain and give yourself plenty of time to enjoy the activities. The places I enjoyed visiting were the London Eye, Madame Tussauds, Wembley Stadium Tour, seeing three west end shows which consisted of Wicked, Mamma Mia, and Phantom of the Opera, eating at Pétrus, and finally doing a hop on hop off bus tour. First, the London Eye is a giant Ferris wheel that overlooks the entire city of London giving viewers an unforgettable 360-degree view experience. It is one of London’s famous attractions that is always busy, and has an average of 3.75 million visitors each year. Although I booked a reservation in advance, I found out that was not the time I would be getting on the London Eye, but it was the time that I could stand in line for the London Eye. I still waited over an hour in line to get on to ride the London Eye. It was very frustrating and misleading because I then missed some of the other activities that I scheduled that day. Secondly, Madame Tussaud’s is a wax figure museum that has over 200 life-size human wax figures. It is another attraction in London that gets very busy in the afternoon and evening, so I recommend going during the morning. Some of my favorite wax figures that I saw included Benedict Cumberbatch, Kate Winslet, Leonardo DiCaprio, Captain America, the royal family, and finally One Direction. Wembley stadium is the largest stadium in England, and I would consider it to be the best stadium tour there is! The stadium tour gives customers the chance to learn about the history of the stadium while getting the opportunity to go backstage and see the dressing rooms, players tunnel, press room, and the royal box. Then, at the end of the tour, customers will get the chance to hold the Emirates FA Cup for a photo. Even though I enjoyed seeing Wicked, Mamma Mia, and Phantom of the Opera, Wicked had to be my favorite musical at The Apollo Victoria Theatre. Wicked is about a girl named Elphaba, who is born with green skin and grows up to be the wicked witch of the west. This musical centers around before the Wizard of Oz giving the audience a backstory of what happened before, during and after the Wizard of Oz. London has a variety of restaurants, but my favorite had to be Pétrus, which is owned by Chef Gordon Ramsay. Pétrus is an upscale French restaurant with an amazing menu and service. It has a glass-encased wine room in the center of the restaurant that holds up to 2,000 different bottles of wine. Finally, by day four my feet hurt. The hop on hop off bus tour was a great way to sit back and relax while enjoying the history and enjoying all of the sites in the city of London. Some of the places the bus tour visits include The Tower of London, The London Eye, Madame Tussauds, London Bridge, St. Paul’s Cathedral, London Zoo, The Shard, and Buckingham Palace. It was a great way to get around London and to visit many attractions. London definitely has a problem with over tourism making it difficult to fully enjoy. Even though I wished I had more time to spend visiting the attractions in London, I am pleased with my experiences. I definitely look forward to going back soon!